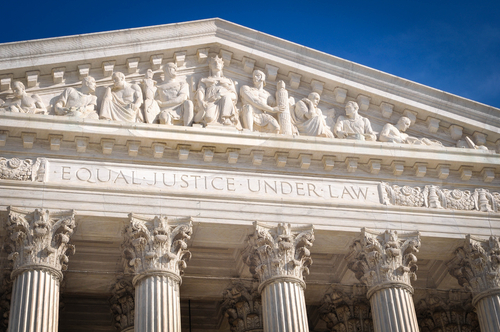 The Supreme Court in a 6-3 vote recently revised a pregnancy discrimination lawsuit against United Parcel Service (UPS), saying that lower courts had used the wrong standard to determine whether the company had discriminated against one of its drivers. The high court remanded to the Fourth Circuit Court of Appeals to reconsider whether summary judgment is appropriate under a new standard for liability under the Pregnancy Discrimination Act (PDA). The PDA amended Title VII of the Civil Rights Act of 1964 (Title VII) to clarify that discrimination on the basis of sex includes discrimination on the basis of pregnancy, childbirth and related medical conditions.

The case involved Peggy Young, a UPS worker, who sued under the PDA, which requires employers to treat “women affected by pregnancy” the same as “other persons not so affected but similar in their ability or inability to work.” Young claimed that UPS intentionally discriminated against her by refusing to accommodate her pregnancy-related lifting restriction by transferring her to a light-duty position. UPS countered that its refusal to accommodate was based on a legitimate, non-discriminatory business reason. Specifically, its refusal was based on provisions of a collective bargaining agreement that provided light duty only to drivers who were injured on the job, who had lost their Department of Transportation certifications and who suffered from a disability covered by the Americans with Disabilities Act (ADA).

A unanimous three-judge panel of the Fourth U.S. Circuit Court of Appeals in Richmond, Virginia, dismissed the lawsuit saying the pregnancy law does not give pregnant women “a ‘most-favored-nation’ status.” Now the Supreme Court has stepped in, vacated the decision, and said Young deserved another shot at trying to prove that UPS had treated her “differently from a large percentage of non-pregnant workers” who may have been offered accommodations.

According to the National Law Review, the new standard by the Supreme Court is a twist on the three-stage burden-shifting paradigm established in McDonnell Douglas Corp. v. Green, used to evaluate disparate treatment discrimination claims. “The Court, however, made clear the new standard is applicable solely to PDA claims where the plaintiff has asserted that she has been denied an accommodation for a pregnancy-related work restriction given to others who are not pregnant but similar in their ability or inability to work,” says the National Law Review. “In such a case, if an employer has pointed to a neutral policy as its legitimate reason for the differential treatment (and denial of the accommodation), a plaintiff can demonstrate that the policy is a pretext for disparate treatment discrimination by proving that the policy imposed a ‘significant burden’ on pregnant workers and that the reasons for the policy are not ‘sufficiently strong to justify the burden’.”

Since the Young case landed in court, UPS has changed its policy to offer light duty to pregnant women.

A similar case to Young’s has also been filed in California. A farmworker alleged she was fired by an egg-packing plant in Kern County after asking for light duty when she became pregnant. The plaintiff claims she gave her employer, Farm Fresh Packaging, a doctor’s note in February 2014 saying she should not be lifting more than 25 pounds, and was told only those who were “100 percent able to work” could remain employed, even though she knew less-stressful jobs were available. The suit claims violations of both federal law and California law, which entitles pregnant women to reasonable accommodations at work without having to show similar treatment for other temporarily disabled employees.

We’ll be keeping our eye on these cases to see how the suits proceed and ultimately are resolved. These cases highlight the employment practices issues companies face, including allegations of discrimination and the potential for possible regulatory violations. Caitlin Morgan offers Employment Practices Liability Insurance (EPLI) to clients to protect against these types of lawsuits and can provide firms with a broad policy form. Give us a call at 877.226.1027 to find out how we can assist you.